Most people I talk to don’t know much about general aviation.  The closest I usually get is that somebody’s dad was a pilot or airline pilot or they rode in a “cessna” once (yup, that’s a lowercase “c” as if it encompassed an entire genre of vehicles).  It’s a mysterious topic to most people, so I always try to relate it to something a little more mainstream, like cars.

Being the Statesman that I am, I’m not going to lie to you.  Airplanes are expensive, like house or boat or Aston Martin expensive.  But! That’s not to say there isn’t some wiggle room. The older and less capable you go, the more affordable plane you can get into.  Most of us mere mortals will only ever be able to eek into a “well-loved” older model of flying machine, if at all, and that’s more than adequate.

How about some numbers from the “mere mortal” class, but you’ll have to reach back about 30 or 40 years…

I typically like to say that a “well-loved” airplane is roughly equivalent in purchase price to a sports or luxury car:

Of course, the purchase price is only one of the costs of aircraft ownership and it can often be mortgaged out to 15 or 20 years.  You probably already have a place to park your cars, but you’ll need a hanger or tie down on an airport.  Inner-city airport parking typically comes with a premium just like anything else in the city (it is valuable real estate, after all). We are fortunate to have a great little airport just outside of the city that is easy to get to and from during the crazy DFW rush hour.

Beyond those big items, you’ll have other fixed costs like maintenance, training, and insurance; charts and database subscriptions so you know where you are and how to get home; electricity for the hanger if want lights at night. (We don’t have lights at night.)

Often, it is the prospect of paying all of these fixed costs that really gets people interested in shared ownership.  There is a lot to like about shared ownership and we may try that someday.

In the next post, I’ll talk about our ownership experience here in the DFW Metroplex and a few of our typical trips. 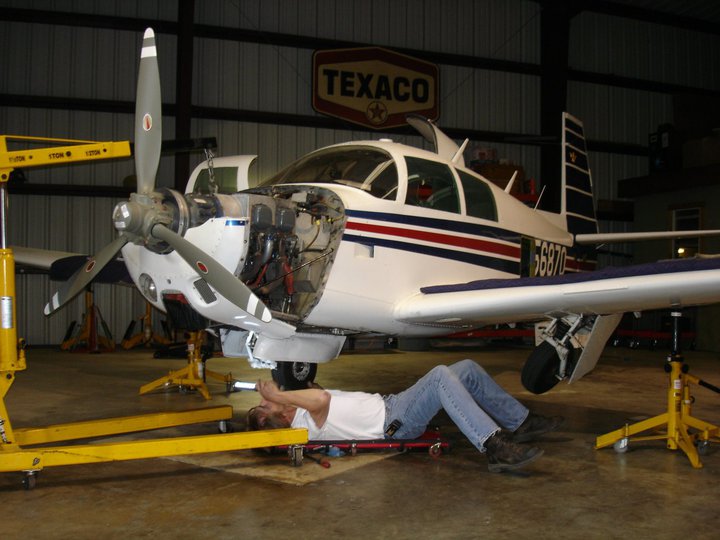 Each year, aircraft owners enjoy at least a week of downtime for FAA-mandated “annual” maintenance.  People often ask me how I feel about flying a machine built in 1965.  I typically respond with something like: Imagine if we took your car apart once a year, looked into the engine, analyzed the oil for contaminants and metallics, and applied a list of manufacturer required maintenance and safety items from the previous year.  You would see cars that last longer, perform better, and are safer.  By that same token, the design lifespan for cars is short enough to almost negate this level of attention.

We had a bit of concern leading up to our first annual in 2010 since the previous owner had owned the aircraft since 1979.  There is no way to really know what a fresh set of eyes will turn up even though we had a very experience Mooney shop perform the pre-purchase inspection.  Those pre-purchase inspections aren’t required by any regulation, but I can’t imagine making a big purchase without one.

Our 2010 annual turned out just fine.  I helped do some of the easier chores like removing panels, landing gear doors, etc.  All this helped our mechanic (Tom) get through the process 1-2 days sooner.  Probably more importantly, I had a chance to look in, over, and around many deep and dark places originally assembled more than 46 years ago in Kerrville, Texas.

I’ll have some new pictures and more details about the process as our 2011 inspection kicks off in a few weeks. 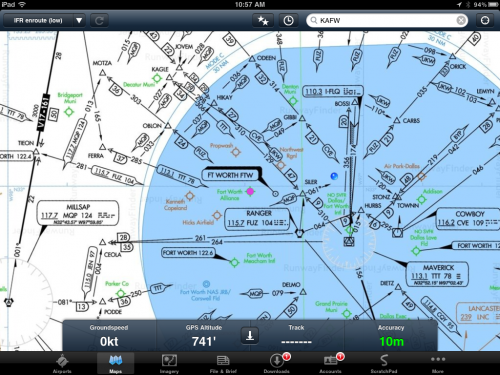 In Part 1, I talked about the benefits of going paperless in the cockpit with the iPad.  For this installment, I’ll go over some actual early in-flight operations.  Mounting options, flight control clearance, and screen polarization are covered.

Both flights so far (1 IFR and 1 VFR) were performed with only the trial period of the Foreflight HD software.  That means that you can’t bulk download charts and data for a whole region.  You have to lookup each airport and save all of the terminal plates and then scroll around the map area that you’ll need.  Also, the “Pro” subscription is required to test the geo-referenced approach and taxi charts.  It would have been nice to be able to try this during my 30-day trial period, but it is a new feature and I hope it will be added to the trial at a later date.

Discarding the IFR flight because I hadn’t read the software user manual yet leaves us with a bumpy local VFR flight.  Mooney cockpits are notoriously compact like a sports car, so the first issue is finding space for the iPad.  The instrument panel is full and the Johnson bar for the manual landing gear leaves out a lower-pedestal mounting option, so I’m left with the kneeboard option.  This is fine anyway since I almost always fly with a kneeboard and there are some swanky new boards coming to market especially for the iPad.  The other issue with the kneeboard is that the flight control arm comes dangerously close to the iPad glass nearing full right deflection.  It’s rare that we need full right deflection, but if we did, it’s highly unlikely that I’ll have enough time to ensure that the pretty glass is safely clear before righting the aircraft.  I don’t think Cessna drivers will have this problem, and certainly the side-stick (Cirrus and Lancair) guys are loving all their knee-room.

My next issue is polarization of the screen.  With my now 4-year old Maui Jim’s, the iPad screen is completely black in portrait mode.  Rotate to landscape and all is great in the world except my space issue with the flight controls.  Also, the approach charts are portrait and look glorious that way.  If you wear (and like) polarized sunglasses, you’ll want to check this out before purchase and preferrably in sunlight.

In the next installment, we’ll cover building and actually flying routes.  There is at least one trick that you’ll need to know before launching out into a real flight. 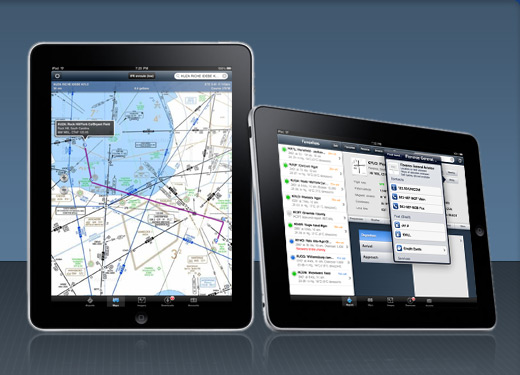 One of the on-going expenses in operating an aircraft is buying both VFR and IFR charts and publications every 1-2 months.  These aren’t normally expensive either, typically about $8 per region, but our usual intra-Texas flights require 6 different publications.  Imagine then traveling across several states (our trip to Florida required 10 pubs) or the farther.

When the original iPad first launched, the aviation community saw some immediate parallels to the existing state-of-the-art electronic flight bags of the time.  Those devices, both highly specialized and ruggedized for the rigors of cockpit life, sold for thousands of dollars and had just one mission in life.  The iPad can do all that and much more with the right software.

After passing on the first-gen iPad, I picked up a shiny new iPad 2 on launch day with a plan to use it while flying in addition to the daily web consumption activities.  I’ll have to tell the iPad2 launch day store later.

I almost immediately loaded a free trial of arguably the best in-flight software for the iPad: ForeFlight HD.  The maps and charts are gorgeous and bright and full color, whereas the printed publications come in any color you like as long as you like black.

The mid-size iPad or bigger can hold all of the charts, maps, and publications for the whole US.  Weight and volume are a big deal in light aircraft transportation and this device and appropriate software can replace an entire case of paper for cross country flight.

One of the big issues in a transition to digital is safety of flight.  Paper is pretty safe and not known to spontaneous combustion, so short of being tossed out a window, most pilots are usually confident that their paper charts will be available when needed.  With digital devices, people start to worry about failures, blue screens of “death”, backups, and the regulations.  I’m not completely convinced yet, but I’m headed down the path.

I also think the pricing model for the Foreflight software is pure genius.  With my annual subscription fee, which is far, far less than buying a year worth of paper charts, I can use the software on 1 iPad and 1 iPhone!  Woohoo!  Now, I have a digital backup for the main device and still don’t need any paper.

In the next installment, I’ll talk about my flight tests with the new system.

I’m not sure that this site will have a particular theme or focus, but I do frequently run across some good tidbits of data or knowledge that I’d like to either share or preserve for later.

The photo is from our trip to Florida for STS-131, one of the last shuttle launches.  The start of a long and exciting journey for the crew and the end (or almost so) of an era of manned space flight that has been so consistent for my lifetime.